I spent about a month in Bulgaria, and in that time I fell in love with Bulgarian cuisine. In fact, it was probably my favorite cuisine of all the countries I’ve visited so far.

Bulgarian history is complicated. The country has been a crossroads of many civilizations throughout time, and thus, its food is a collection of different cultures. Greek, Ottoman, and Slavic culture along with the country’s unique climate combine to make Bulgarian cuisine special.

It’s an ideal mix of fresh vegetables, yogurt, cheese, spices and grilled meat, but what I particularly loved about Bulgarian food was not just what they eat but how they eat it. Bulgarians cherish time with family, and eating together is one of the best ways to enjoy each other’s company. Traditional dishes are shared amongst friends and family over the course of a few hours. One night, Dewey and I went out to a traditional restaurant, and we were seated next to three older Bulgarian men who were still there chatting, laughing, and eating after we had paid the bill (and we were there for 2.5 hours)! Bulgarians never rush to finish their meal, and the waiter will often leave you be until you call him/her back over to order more.

Here are some of the many delicious specialties you should try while vacationing in Bulgaria:

If you’re like me and prefer savory over sweet dishes, banitsa is the perfect breakfast option for you. It’s a popular pastry made with filo dough, butter, and Bulgarian cheese and then baked in the oven. Though not low in the calorie department, it’s definitely worth a try. Plus, it’s a great for munching on-the-go while you explore the city. One of the tour guides I had in Sofia told me he eats one every morning! 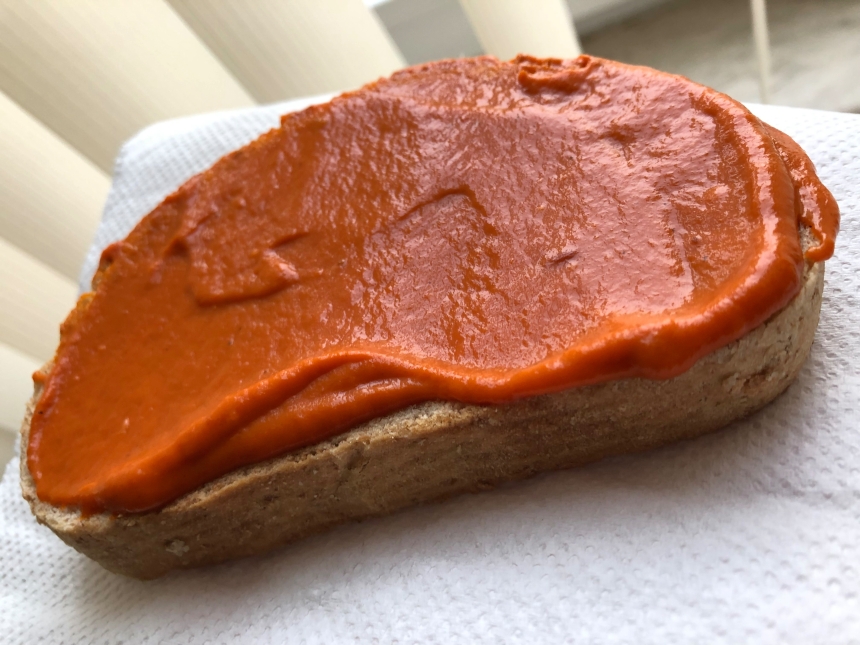 Lyutenitsa is a spread made mostly of smashed red peppers and tomatoes and packed with flavor. There are many variations of it: puréed or chunky, spicy or mild, and different vegetables can be added as well. Most Bulgarians grew up eating their grandmother’s homemade version on toast for breakfast. I wasn’t lucky enough to try the homemade kind, but fortunately it’s sold in grocery stores all around Bulgaria. I tried various takes on the spread, but my favorite was the chunkier kind with eggplant added. I ate it almost everyday I was there (I especially liked having it with scrambled eggs— though not typically eaten this way, I’d definitely recommend it). I even bought two jars to carry with me to our next destination!

It would be a crime to leave Bulgaria without tasting the yogurt (or to Bulgarians, “sour milk”). Bulgarian yogurt is so important that it’s considered to be a part of the people’s identity and something they are extremely proud of producing. Seriously, yogurt is everywhere and consumed in every way: as a dip, salad, cold soup, drink, or sold homemade in jars outside of locals’ homes! What makes their yogurt different is a special kind of bacteria, Lactobacillus bulgaricus (yes, even the bacteria is named after the country), that grows naturally in the Bulgarian climate. It makes the yogurt thicker and SO fresh. Locals believe it’s linked to good health, cures hangovers, helps sunburns, and can even make you live longer!

My favorite dish that you’ll find on almost every restaurant menu was the yogurt salad. It’s made with cucumber, dill, garlic, and walnuts. It was so simple yet so refreshing especially before a heavier grilled meat dish. Another common dish that I didn’t have a chance to try (but I will on my next visit) is the cold yogurt soup called tarator, which is made with similar ingredients as the salad and eaten in the summer.

Even if you’re not a yogurt fan, give Bulgarian yogurt a chance. It’s unlike anything sold in grocery stores in the States! 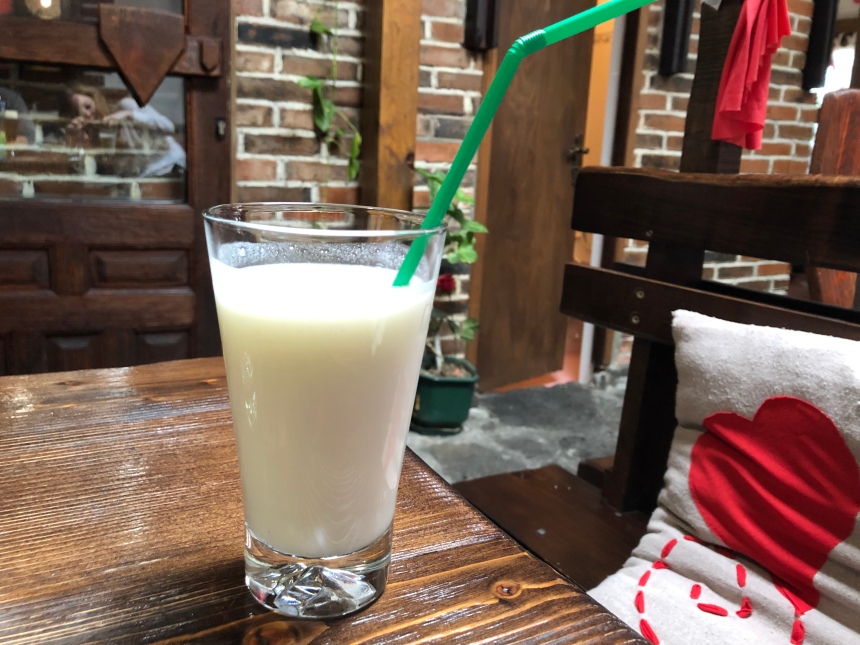 I became obsessed with this drink while I was visiting Bulgaria. It’s sour and slightly salty and made from the same Bulgarian yogurt mentioned above. It can be sipped with breakfast or lunch; I usually had it with a banana in the morning, and it kept me full for hours. You can find it served fresh in restaurants or sold by the bottle in grocery stores. It contains that same bacteria that’s in the yogurt, so it’s great for your health!

Every restaurant in Bulgaria will have Shopksa salad on the menu, and that’s because its creation is tied to when the country was under Communist control. The government wanted to create a dish that represented Bulgaria and could be replicated and sold in every restaurant. So, the Shopska salad was invented. It’s made with red pepper, cucumber, tomato, onion and topped with freshly grated cow cheese. The ingredients are meant to represent the colors of the Bulgarian flag.

Though no longer a Communist country, the Shopska salad remains a staple of Bulgarian cuisine. What makes a Shopska salad so delicious is the freshly grated cow cheese on top. Dewey and I found it so flavorful we didn’t need to add any dressing!

Nowadays, you can find many other salads offered on the menu, such as a Shepard’s salad, which is essentially the same as Shopska but with ham and egg. I found the produce in Bulgaria to be so fresh that any salad you pick will be tasty!

It can be made from various fermented fruit, though Bulgarians commonly use grapes, apricots and plums. It’s served in a small glass and traditionally consumed throughout the meal. Bulgarians never drink it without food, as it’s very strong— especially if it’s homemade. Though Bulgarians usually drink a few glasses of it during dinner, I suggest trying one glass with your salad or appetizer and switching to wine if you want to remember the rest of your meal!

Reflecting its Greek past, mezze is a big part of dinner out in Bulgaria. If you’re unfamiliar with Greek mezze, it’s essentially a selection of small dishes served as appetizers. I love this tradition. There’s just something so pleasant about chatting with friends and family, drinking wine (or rakia as the Bulgarians do) and slowly enjoying small bites. Many different options are available to order, but most common is white cheese and dried meat called lukanka (Dewey’s favorite). I liked the stuffed vine leaves the best. Order a selection of plates, and be sure to take your time eating just as the Bulgarians do!

Peppers are found in many Bulgarian specialties, so it’s no surprise that they also eat them stuffed. Usually made with red peppers for more flavor, they’re filled with minced meat (either pork or veal), rice and a variety of spices. They can be either boiled or baked and sometimes even fried. You can order them as an appetizer or pick them up at a local market (check out the Ladies Market or the Central Market Hall by the Sofia History Museum) and have as a snack between sightseeing like I did!

As a majority of the country is Orthodox, most Bulgarians fast around Christmas and have to avoid eating anything that comes from an animal. Thus, beans became a popular alternative for protein. The most common dish is the bean soup. It’s slowly cooked and full of spices. You can also find them roasted and served as a starter (like the ones in the picture above).

Okay, so kebapche (similar to ćevapi) is a dish common across all of the Balkans, but it’s still worth trying during a visit to Bulgaria. It’s a type of grilled minced meat similar to kebabs made with spices and often eaten with fries. 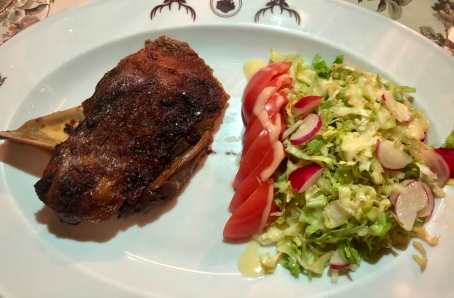 Bulgarians are meat lovers, so you can also find other grilled meat on the menu, such as meatballs, pork filets, roasted lamb, pork neck, and sausage. It’s all quite simple, but the spices make it so tasty!

Bulgarians make many wonderful stews and casseroles in clay pots— a tradition that stems from Ottoman times. You will find beautiful pottery sold all over Bulgaria, and that’s because they believe cooking with them adds more flavor, and I couldn’t agree more! They make many specialties with clay pots, but most common is a slowly cooked mixture of chopped vegetables with chicken, beef or pork.

Various pies, soups, eggs, and more can also be cooked in these clay pots. The combination of the colorful pottery and the hearty flavors makes this tradition the perfect meal to eat after a long day of sightseeing.

The Bulgarians have a history with the Greeks that dates back to when the Thracian people first migrated to the area. So, naturally, there is a lot of Greek influence in their food. However, Bulgarians like to add their own twist to some traditional dishes like moussaka. Rather than making it with eggplant like the Greeks, they use potatoes, yogurt, yellow cheese and minced meat. I don’t have a picture because I didn’t have the chance to try it, but it’s definitely at the top of my list for when I return (especially knowing how delicious Bulgarian yogurt and cheese is)!

I had no idea wine production was a big industry in Bulgaria before I arrived, but I had fun tasting a variety of local wines with my dinner— especially red wine. I quickly learned that I didn’t need to ask the waiter whether the wine was dry because almost all Bulgarian wines are dry (which I prefer). Wine production dates back to Thracian times in Bulgaria and they are arguably as tasty (and WAY less expensive) as Italian wines!

Just a travel lover with an iPhone inspiring others to see the world through real, unedited & authentic experiences.