Surrounded by massive mountains with the aqua-blue Neretva River running through it and a remarkable stone bridge, the old town in Mostar looks very much like a fairy tale. It’s a city that doesn’t get as much attention as some of its Balkan neighbors; yet, its diverse ethnic makeup, complicated past, and lingering Ottoman influence make it a rich travel experience worth more than just a few hours. Though still recovering from the devastations of a war only as old as I am, restoration efforts have come a long way, and the city offers picturesque views, alluring activities, and unique learning opportunities for the curious traveler.

What I loved about Mostar is that when I arrived from Split in Croatia, I felt like I had traveled much further than three hours. Reminders of its Ottoman past are still prevalent in the city because Bosnia & Herzegovina is one of the few Balkan countries where many people converted to Islam and remained in the country after independence. Travelers can observe elegant mosques, Turkish-style houses, a market that feels similar to a Turkish bazaar, and hear the call to prayer five times a day.

If you’re thinking about visiting Mostar, I urge you to stay overnight. When the evening comes and the tour bus crowds go home, the city lights up and begins to feel magical. With less people around, wandering through the pebbled streets of the enchanting old town past colorful houses with roofs made of stone makes you feel as if you’ve traveled back in time.

Read on to learn about all of the exciting sights and activities Mostar has to offer and discover why you should keep this intriguing city on your travel radar.

1. Walk Across the Historic Stari Most Bridge

The Stari Most Bridge is probably Mostar’s most recognized landmark. It was built in 1556 by the Ottomans and had the widest freestanding arch in the world at that time. It survived for centuries before it was tragically destroyed in the Croat-Bosniak War in 1993. Fortunately, it has been rebuilt using the same materials and original methodology, allowing tourists to be able to admire the impressive architectural feat once again.

You can also watch adventurous men diving from the bridge, a tradition that began in the 17th century as a way of impressing the ladies in the town! Nowadays, they’ll wait until they’ve collected about 30 kuna from an eager crowd and then jump 78 feet down into the water. If you are brave enough to jump yourself, they offer a full-day training course you’ll have to take before you can attempt it on your own!

Traveling is about getting to know another culture, and understanding the country’s history plays an important role in appreciating how the country came to be what it is today. If you’re planning a trip to the Balkans and are a history nerd (like me), having the opportunity to learn about the fall of Yugoslavia from the different viewpoints of the countries involved can’t be missed.

Bosnia and Herzegovina has long been a multi-ethnic region composed of Catholic Croats, Bosniaks (Bosnian Muslims) and Orthodox Serbs. With the break up of Yugoslavia and the succession of Croatia, tensions between ethnic groups began to rise within the region, and the Bosnian War of 1992-1995 was the result of these ethnic divisions. The War Photo Exhibition is a powerful series of photographs that illustrates the tragedies of the war, in which the Stari Most Bridge was bombed, and gives you insight into the lives of civilians living in Mostar at the time. It’s an excellent way to understand the complex past of a city still healing and how it came to be the beautiful place tourists enjoy today. 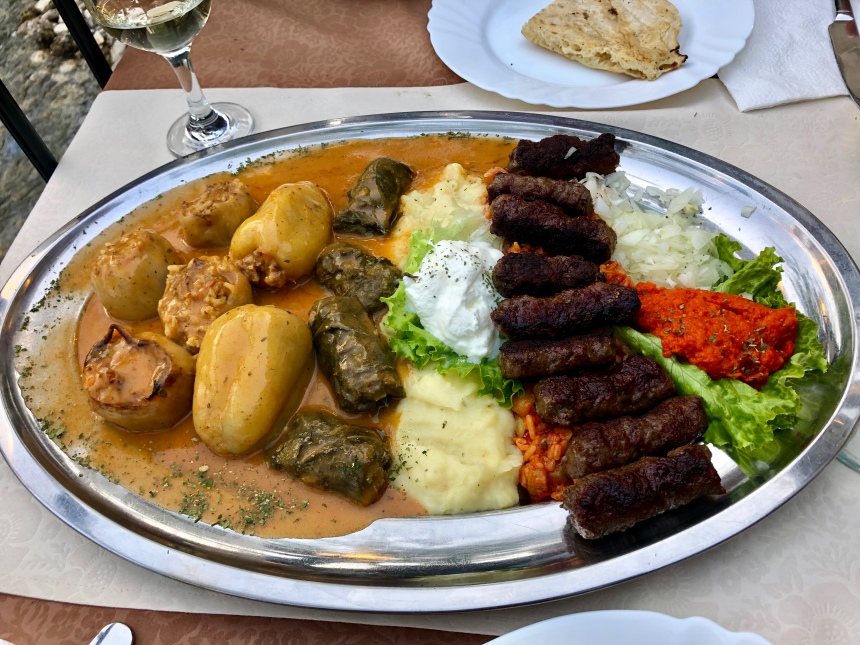 Mostar has many restaurants with inviting terraces that overlook the Neretva River. Because Mostar is still a bit undiscovered, with the most crowded times being midday when tour buses arrive, it was easy for us to get a table at night right next to the river (another reason to stay overnight!).

Most of the restaurants offer traditional Bosnian and Herzegovinian food served in big portions at an extremely affordable price. Dewey and I split a platter of traditional food and a bottle of wine and our bill only came to $36.

The cuisine is similar to the rest of the Balkans with dishes like dolma and ćevapi, but some items are unique to the country’s diverse history. A specialty of the Mostar region specifically is Sogan Dolma which is onion stuffed with rice, minced meat, and seasoning. You should also try a traditionally Ottoman dish, Begova Corba (Bey’s Soup in English), a soup made of vegetables and chicken cooked until the broth is creamy and rich. It tastes like a chicken pot pie made into a soup! To finish, sip on a delicious coffee paired perfectly with a sweet treat like baklava.

4. Visit a Mosque & Enjoy Panoramic Views of the City from the Minaret

There are many beautiful mosques in Mostar that, despite being damaged in the recent Bosnian War, have been restored and can be observed by visitors today. Though I had seen a few mosques throughout my travels in the Balkans, Mostar had by far the most, and the countless minarets piercing the sky throughout the city make for a striking view. One particularly well-preserved mosque built by the Ottomans in the 17th century is Koski Mehmed Pasha, which you can visit for a small fee. Take in the peaceful interior and climb to the top of the minaret for glorious views of the river, the city, and the surrounding mountains.

5. Observe the Cultural Mix of Architecture

Mostar has a diverse mix of architecture representative of its Ottoman, Austro-Hungarian, and former Yugoslavian past. Turkish houses and mosques sit next to apartments built in the geometric Brutalist style of the Socialist Era. Close by, administrative buildings constructed in the Neo-Renaissance style of the Austro-Hungarian Empire tower over the streets. In an attempt to celebrate cultural differences in the country while maintaining influence, the Austro-Hungarian Empire supported the construction of new buildings in a way that combined European designs with that of Mostar’s Ottoman past. The result was the unique Moorish Revival architecture. Mostar’s first high school is an extraordinary example of this.

Free walking tours are one of my favorite ways to orient myself with a new city. Luckily, Mostar offers a free walking tour everyday that you can join (for more information on the tour times, click this link). Having a local share about his/her own country and traditions is always a valuable experience.

What I particularly enjoyed about the tour, though, was that the guide provided insight into life during the recent war, which gave us a better understanding of a complicated time. The tour takes you beyond the old town and shows you how much of the city is still in ruins. The guide even showed us photos of buildings that used to exist in the very spot we were standing but were bombed during the war. Taking a tour like this one was beneficial because it gave us a different perspective we might not have received had we just kept to the restored old town.

There are two markets held on the streets that lead to the Stari Most Bridge that you can wander. Similar to a Turkish bazaar, the market sells mostly Turkish crafts such as intricately decorated tea sets, jewelry, carpets, scarves, and ornate mosaic lamps. Some of it can be tourist junk, but amongst the corny souvenirs you can find some real gems. Grab an ice cream cone from one of the nearby cafes and take a stroll!

Mostar makes for a great home base to explore various destinations in the surrounding area. One of these destinations is the Blagaj Tekija, a Dervish monastery located beneath a massive cliff next to the sparkling blue Buna River. This was probably one of my favorite excursions so far. The water from the river is so pure you can drink from it directly. Just 30 minutes by bus or car, it makes for a perfect half-day trip. Dewey and I had fun exploring the monastery and then sat down at one of the many cafes that align the river for an outdoor lunch with a dramatic view.

Another day trip you can take from Mostar is to see the Kravice Falls. As I was only in Mostar for two days (and wished I had more time), I didn’t have a chance to explore the park. The waterfalls are only about 50 minutes by car from the city, and our guide told us they’re stunning especially because they aren’t as widely known as other national parks like the Krka Waterfalls in Croatia. So, you can take in the nature without tons of tourists around.

My only regret after visiting Mostar is that I didn’t allow myself more time to explore Bosnia & Herzegovina. I have heard great things about Sarajevo, the country’s thriving capital , and I am definitely planning to include it in my future travels!

Just a travel lover with an iPhone inspiring others to see the world through real, unedited & authentic experiences.